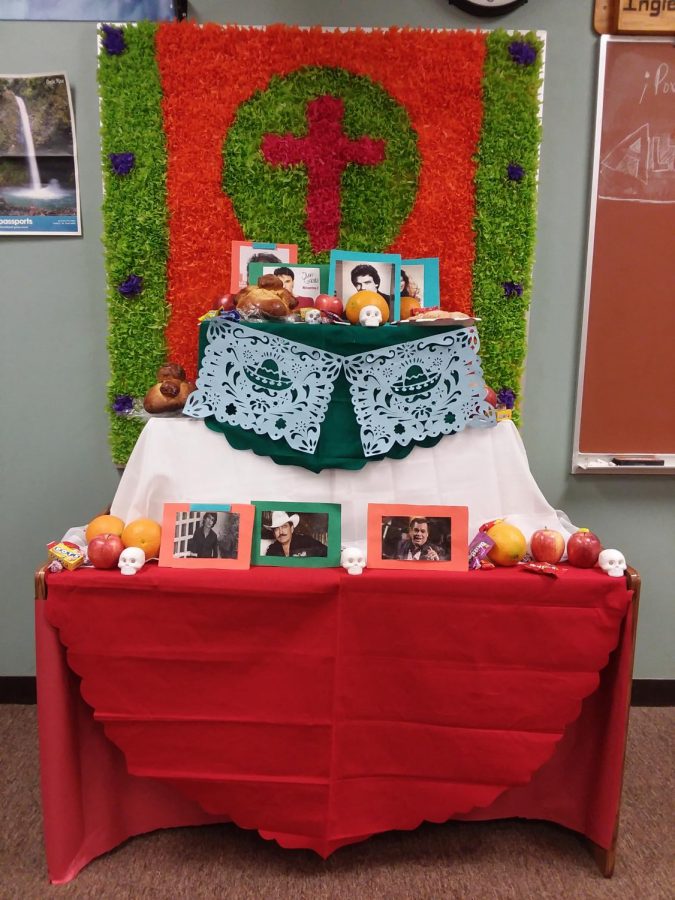 The Day of the Dead altar that Spanish Club members designed. It is decorated with tissue paper, photos of famous Central American singers, colored tablecloths, and many more.

In the past, Spanish Club has been focused on big, out-of-country trips. The club has had the opportunity to travel to places like Spain, Costa Rica, and the Dominican Republic. People who have gone on the trips have come back with amazing experiences, but Spanish Club is moving to a new focus.

“There are a lot of changes happening in Spanish club since the year before. Our focus (then) was on fundraising for trips. We didn’t get to do a whole lot of other activities,” club member Leah Feldman, Spanish Club president said.

Spanish club sponsor Mr. Brad Settle confirmed plans to engage in more Spanish focused activities throughout the year instead of one big trip.

Spanish Club has already started to implement the new changes. During seminar in the months of October and November, members designed an altar for Día de Los Muertos (Day of the Dead). Members consulted internet images for inspiration and then added tissue paper on the bulletin board to create a cross and put pictures of famous Central American singers, like Joan Sebastian, on the altar.

The altar gave members a chance to dive into an important activity in Spanish culture.

“I thought it was fun decorating the altar because in the end we would have a gorgeous altar and be proud of what the club accomplished,” Spanish club member Haylei Inks said.

One activity that Feldman is looking forward to the most is making a piñata. She enjoys hands-on activities, and this will give students an opportunity to connect with each other at club meetings.

Another possible activity is a culture day.

Club member Becca Glahn said she hopes a culture day could involve not only students but also the community.

“It will be fun to give back to our community instead of taking away because we always fundraise, but now we are trying to do more community service type of stuff. We can spread what Spanish Club is about and how we represent the school,” Glahn said.

Many students are looking forward to these new changes.

“I’m excited for all of the things we can do this year since we aren’t fundraising,” junior Kanin Elkins said.

Without having to work concessions for the junior high basketball games and wrestling events, members are excited to find time for activities that don’t involve fundraising.

Trip participant Amber Beaumont said that she believes that her Costa Rica trip was a once in a lifetime vacation, but the fundraising was not enjoyable.

“We will not be as busy during the winter season and not have to worry about concession stands. It was hard to raise a lot of money in such a short amount of time,” Beaumont said.

Feldman said she would also like to see more new members. She emphasized that students don’t have to be in a Spanish class to be in Spanish Club.  She was not able to take Spanish 4 this year but is still highly involved in the club. Spanish Club is all about including everyone that wants to learn about the language and culture.

“Members will be able to connect with others during the new activities that people will be participating in. We will be learning a lot about the language throughout the year and I think it will be a fun experience,” Feldman said.