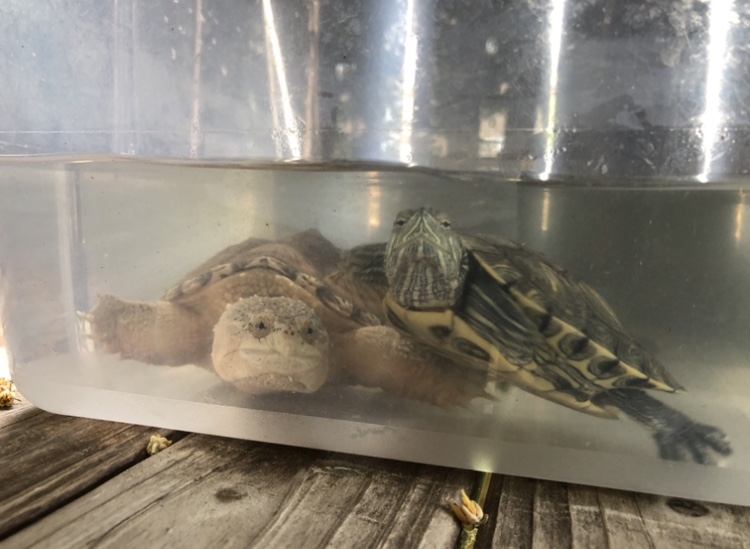 My pet snapping turtle was having a rough go around on his first winter. I had been going outside three times a day to break the ice in his container and pour in hot water, but finally, winter won the battle, and in January, I couldn’t use a hammer to pound the ice in fear I would hurt Snappy and my other turtle.

Somehow Rosie had gone unscathed, and she was perfectly fine, but Snappy, on the other hand, was almost completely frozen under Rosie’s log and couldn’t move.

When my dad came outside to help me, I had a hot bucket of water ready to melt some of the ice so we could get Snappy out.

Eventually we got him to where we could put him a bucket of cold water with ice cubes in it to thaw him out.

Turtles are cold blooded, so they can tolerate very cold and very hot temperatures, but they don’t do well with big, quick temperature changes. After about an hour and a half, we had gotten him thawed out. Snappy, amazingly, was still alive, but my dad told me not to expect Snappy to live because he was completely frozen.

As the days passed, I kept a very keen eye on Snappy. He seemed completely fine.

This winter, Snappy got frozen under the ice again. This time, his heater had broken, and with the cold weather, he got frozen quickly. Once again, I had my dad help me remove Snappy from the ice, and Snappy survived again.

In the past four years, I have learned about turtles and what they do. However, some of my knowledge and expertise didn’t come to me quickly enough to save one of my turtles. Last summer I got a new turtle that I named Paige.

Paige was a painted turtle. She was a new hatchling, so I put her in a container with Rosie. They were great friends.

When winter came with its swinging temperature changes, Paige didn’t do well. Even with the heater, winter was still harsh to Paige like it was to Snappy. Although Paige didn’t get frozen, she, as a painted turtle, was more susceptible to  temperature swings, and at the end of January, Paige passed on.

That was a sad day. While I don’t love my turtles the same way I love my dog, they do hold a special place in my heart.

Many people would not consider turtles as good pets, but I have learned to love them and they are a part of my world. If I ever find another turtle that isn’t big, I won’t hesitate to take it in.