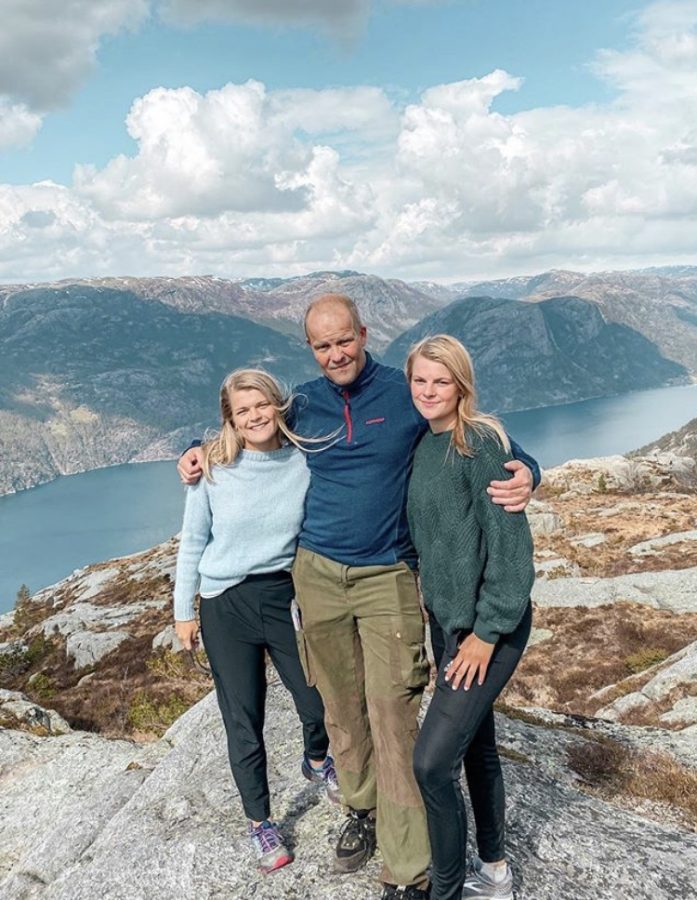 Thea Holland hikes with her sister and father at Sollifhellet after returning to Norway.

After traveling to Puerto Rico for a Spring Break vacation, foreign exchange student Thea Holland learned some bittersweet news from her parents. Her foreign exchange year in Kansas would be coming to an end earlier than she had anticipated.

Originally, Holland was supposed to leave at the end of May but instead, left two months early on March 19 to head back to Norway.

“I didn’t really know that I had to go home until two days before I left, but I had talked to my host parents and biological parents about it for a week, so I was prepared to leave at any time,” Holland said.

Holland’s parents wanted her to return home before the coronavirus became too serious. Once Holland had started a plan to leave, her exchange program, EF, had decided to send every foreign exchange student home.

“I was upset about leaving because Kansas felt like my second home, but at the same time, I was excited about going home to see my family, whom I hadn’t seen in such a long time.”

The trip from Kansas to Norway took Holland three days.

“I got stuck the second day in London and originally had to stay at a hotel alone for three extra days. Thanks to my dad, he could get me a flight later the same day, and I got home safely,” she said.

Holland’s flight landed in Oslo, but she still had a nine-hour drive to her house in Stavanger after that.

After returning home in Norway, Holland had to stay in quarantine for two weeks.

“I had to stay at home and could not leave my house unless I wanted to go for a walk. Now I can pretty much do whatever I want. I have a job and hang out with my friends as often as I can since they are still in school.”

Holland misses attending Southeast with her friends and host family. She is not attending school at the moment because of this unique situation. Luckily, Holland will still receive credit for a full year of high school and return to school next year as a senior.

“Even though I am not back at school right now, I really miss SES. The environment between teachers and students is completely different in the classrooms compared to my high school in Norway. In America, I could choose all my subjects. The teachers were so nice and always there for me, so I felt so free at everything I did,” she said.

She was looking forward to attending Prom and graduation in America.

“Prom and graduation are probably the things I was most excited to experience at an American high school. Our graduation is totally different and most high schools here (in Norway) don’t have a prom at all,” said Holland.