A recap of the 2020 Presidential Election 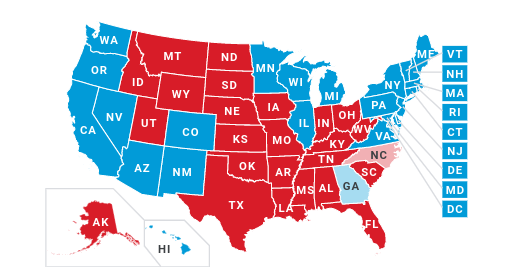 With the final ballots being counted and the winners being called, some remain unsure of the 2020 Presidential Election, while others are confident in the Associated Press and ballot workers’ results. From the looks of it right now, Republicans will hold a majority in the Senate and the Judicial Branch, while Democrats will have the House and Executive Branch. Regardless, this was truly one of the most interesting elections in American history, with mail in voting becoming the deciding factor for who would win, record numbers of voters across the nation, and ballot workers working harder than ever. In key states where Biden was trailing in, such as Michigan, Pennsylvania, and Georgia, some of the final mail in ballots came from densely populated regions that have historically voted democratic. This was the turning point he needed to win. Most of these densely populated regions were from major cities and suburbs within the states that took up a large portion of the population. This election had Democrats sending in the majority of mail in ballots, with registered Democrats taking up 51.3% of the tracked ballots compared to Republicans’ 25.5%. In some cases, like Pennsylvania, registered Democrats had returned their ballots sent to them nearly three times more than Republicans had. Republicans, however, had the majority of in person votes, having 41.7% of the votes compared to the Democrats’ 36.9%.

This had resulted in the close swing states starting out red while slowly gaining in Democratic votes as the ballots were counted. This happened in Michigan, Pennsylvania, and Georgia all within a few days. These three states, along with Nevada had the nation’s eyes on them during the final days of the counting process. The way the election had panned out left an overall six states after Wisconsin had been called for Biden. Nevada was the only one leaning blue, while Pennsylvania, Michigan, Georgia, North Carolina, and Alaska leaned red. Former Vice President Biden had 238 electoral votes, while President Trump had 214. With the surge of democratic voters in the major cities of Michigan, they became the first to begin to lean blue out of the red states. Michigan gained a few more thousand votes for Biden as time went on, so the state was called, putting him up to 264 votes.

At this point, people had their eyes on Nevada, as it was thought that they would be the deciding state. Biden only needed Nevada to win, while Trump, being at a disadvantage, had to hold on to every one of his states, and take Nevada to reach the 270 mark. The eyes on Nevada, however, had quickly shifted onto Pennsylvania, as their results were showing that Biden was gaining on Trump’s nearly 100,000 vote lead. A similar development had also begun in Georgia, as the gap between the two candidates began to close. Eventually, Georgia had flipped blue, with Pennsylvania following behind soon after. Biden began to lead in Pennsylvania by a reasonable margin, so the state was called, putting Biden at 284, meaning that the race was called.

Though the presidential election has been called, some remain skeptical of the results, and the senatorial and house elections have not yet been decided entirely. Democrats will have a majority in the house, but there is still a possibility that Republican candidates will take the rest of the seats, making the majority only by a few representatives. The same situation stands in the senate, as Republicans got 20 of the seats that were up for election this year compared to the Democrats’ 13. Out of the 35 seats, the 2 in Georgia will have a runoff election, as neither of the leading Republican candidates gained more than 50% of the vote. The events of this year have put the country in a stressful and tense situation, with the election making way for arguing, protests, and a split population. Despite all of this, we can only hope that things get better from here on out.