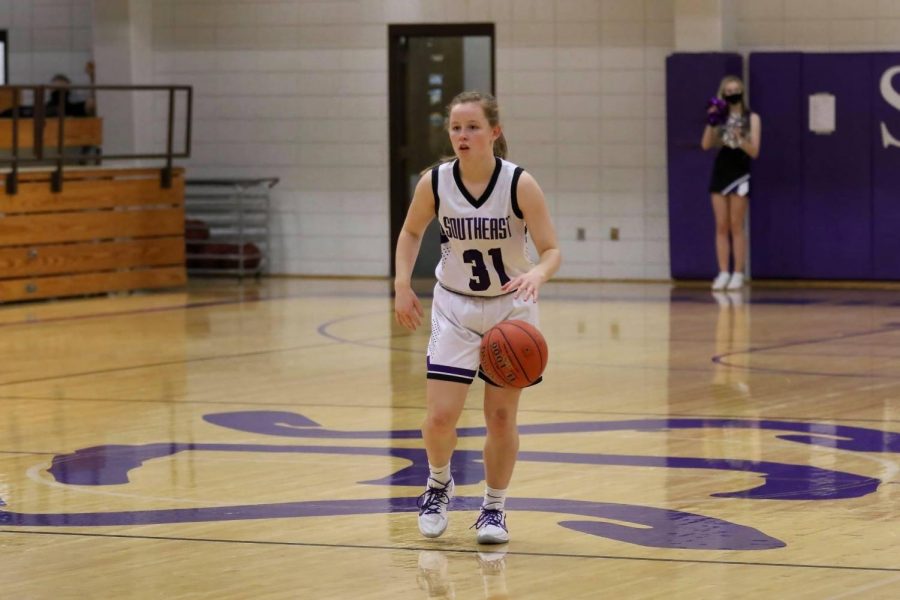 Last year, I wrote a piece about rising basketball stars. For the 2-3 girls team, those stars are now playing full force. On a squad that has no seniors, a shining rarity for a high school team, those stars’ presence is crucial to ensuring a successful season.

“I feel like the juniors and sophomores that play varsity time have stepped it up. If a freshman doesn’t know what they’re doing, we tell them what to do, not in a rude way, but as a leader. We still need that hype person that we had last year which was Madeline Blake. Madeline never failed to bring the hype for the team and to cheer everyone on,” said sophomore Avery Caselman.

Having no seniors on the roster makes for a young starting lineup.

“The teams biggest struggles have been our height and rebounding. We don’t have anyone that is very tall on our team, and we all need to get better about finding someone to block out and then going and getting a ball,” said Reagan Goetz.

While the team lacks in rebounding, they excel in other areas of the game, particularly athleticism and speed.

“We are a very athletic team this year, and that has helped us out a lot. We also have really good defense which creates problems for the other team,” said Goetz.

“We can run the floor on teams, and get back into transition pretty quickly,” Caselman added.

Another group of key contributors this season have been freshmen Maddie Harris, Lexi Jacobson, and Brielle Ptacek. Harris propelled herself from a bench roll to a starting spot after three games, and has praise from her teammates for her scoring and ball handling abilities.

“Maddie Harris and Lexi Jacobson have really stepped up this year. Lexi is a great post, and is very quick and smart when she plays. Maddie began starting varsity after 3 games and has helped the team out a lot. She is a scorer and she can handle the ball well,” said Caselman.

Those young assets should prove valuable stretching through the regular season months of January and February, as well as into the years to come.

“We are still working on finding chemistry as a team, but we have been playing pretty well together. Our goal as a team is to rebound better and get some more wins. My personal goal is to help the team out with rebounding and scoring,” said Goetz.

Usually young times are perceived as rebuilding ones, and while the ceiling is high, this isn’t to say that this season won’t be a successful one. Two of the team’s three losses were within ten points: to 4-1 Smoky Valley and a 5-1 Hillsboro.

The building of chemistry and rebounding skills could lead to a stong substate run. 3A seeding will occur on Wednesday, February 24th, at 10:00 am. The sub-state portion of the season will consist of eight substate tournaments with eight schools at each tournament, with winners advancing to state. Southeast will travel to Hesston with Ellsworth, Gypsum-Southeast of Saline, Halstead, Haven, Hesston, Kingman, Lindsborg-Smoky Valley, and Lyons, per KSAL.com.

First, however, the team has to get through NCAA league opponent Minneapolis. The girls game will tip off at 6:00pm, and the boys will follow soon after. Fans can watch live on Salina Post or can be heard on KINA (910 AM/107.5 FM).