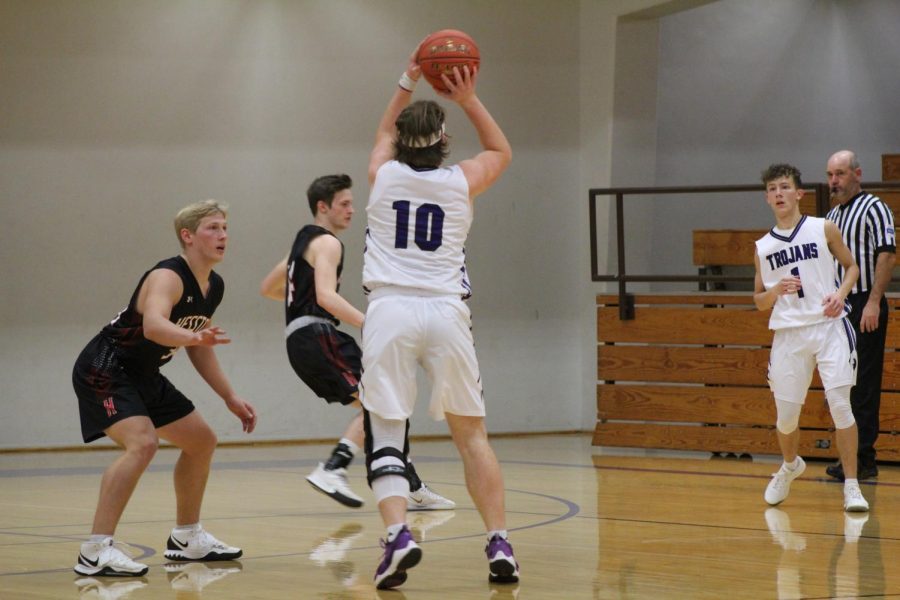 In times when national news is polarizing as ever, sports can be an important outlet for kids, teenagers, and adults alike. Thankfully, for someone living in the Southeast of Saline area, sports are exciting as ever. This week the basketball teams competed in the Sterling Tournament, Wrestling traveled to St Marys, and the Chiefs will head to the AFC championship game against the Bills.

The boys basketball team opened the annual Sterling Tournament with a highly contested game with Hutch Trinity. The Trojans trailed 26-36 at half, but rallied behind a balanced effort to take a short lead in the fourth quarter. Unfortunately, it wasn’t enough to match Trinity’s Lucas Hammake’s 30 points, as Hammake drove in for a buzzer beating layup to close out the game. In game two, however, the Trojans issued a 79-49 beating over Kingman. Camden Spano-Lund has been a recent help to the team, according to senior Grant Stumph, who said “Cam has been on fire lately.” The boys will play again today, January 22, at 4:45pm.

The girls basketball team also opened the Sterling Tournament with a close 52-54 loss to Lyons, but bounced back in their second game to capture a 57-42 win over Hutch Trinity. Thursday night they played a closely contested game against Sterling, but Sterling pulled away to a 64-49 win in the fourth quarter.

The wrestling team had a solid showing at the St Mary’s invitational, with Eli Jackson and Alex Christensen taking fourth, Mac Chambers second, and Matthew Rodriguez first. Rodriguez improved to 13-0 on the season, and is ranked first in the 170 pound weight class.

The Kansas City Chiefs, which are 74% of SES high school students’ favorite NFL team, are headed to the AFC championship game for the third year in a row. In 2019, they suffered a devastating overtime loss to Tom Brady and the Patriots, but avenged that loss a year later, beating the Titans 35-24. As we all know, the story didn’t end there, as they went on to beat the 49ers in a thrilling fourth quarter superbowl comeback. This year, the drama continues. The Chiefs were up 19-3 against a red hot Browns team, but a tough hit from behind left superstar quarterback Patrick Mahomes sidelined with a possible concussion. The Browns came within five, but a bold third down rush from backup quarterback Chad Henne followed by one of the gutsiest play calls in NFL history on a fourth down conversation brought the Chiefs to a 22-17 victory. This week, they will take on another offensive powerhouse, Josh Allen and the Buffalo Bills. Mahomes, just like the outcome of the game, remains questionable for play. He is following the NFl concussion protocol, per a Chiefs press release. The release also mentioned that Mahomes took the majority of the snaps in Thursday’s practice, which gives fans something to be optimistic about. Mahomes is a 25 year old NFL MVP who is one of the most talented quarterbacks to ever step on a field. Many experts believe his contributions are essential, as do SES students. “If Mahomes plays, Chiefs win 35-24. If he doesn’t they lose 35-12,” said sophomore Wade Rutherford. Rutherford wasn’t the only student who felt this way, nearly every student who responded to our survey made a similar prediction. Make sure to follow us on twitter @tro_staff, because we will be tweeting out the student who had the most accurate score prediction. The game kicks off Sunday at 5:40pm and the winner will travel to the superbowl to take on either the Packers or Buccaneers.