The Confederate flag and its place at SES 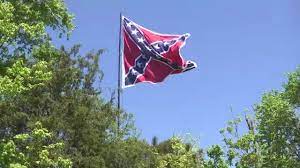 At Southeast of Saline, racism is not something we like to believe we fall victim to. We all like to believe we are good-hearted people, who would say something in the face of prejudice. For the majority of SES, this is very true; however, there are still members of the SES community that commit actions that say otherwise. The Confederate flag is a racist hate symbol, yet there are still members of SES that believe that the Confederate Flag is unproblematic and a patriotic symbol. To try and remove this facet of racism that has drilled itself into SES culture, I believe our best solution is simple: education and moving forward.

To start, take a look at the history and meaning behind the flag. The flag was developed during the Civil War, and (according to Daniel Roberts, writer for the PBS Network) stood as a battle flag for “Robert E. Lee’s Army of North Virginia.” Although there are many reasons that the South seceded from the union, slavery was definitely a driving factor in the South’s decision to succeed. According to Clara Corbould, a writer for the Conversation, claims that after Abraham Lincoln’s election in 1861, southerners began to fear that slavery was going to become a thing of the past. Lincoln was not going to allow slavery to extend into the western frontier, and this upset southerners even more. Eventually, southern states began to succeed, in hopes of retaining slavery. Southerners leaving the union sparked the American Civil War, which in the end left most slaves freed. The Civil War was a product of the south grasping onto slavery, and in the end, they lost. However, according to Brookline Hurd, a writer for Facing History, the flag regained its popularity during the civil rights movement. Those who opposed the civil rights movement flew the flag in opposition. From being used in pro-slavery armies, to its use in opposition to the civil rights movement, one can see the racist background of the Confederate flag.

However, for many Confederate flag supporters, the flag is still symbolic of their history. It’s a flag that represents their southern roots, their “heritage, not hate.” However, I ask that they follow along with this thought experiment. I’m of German descent. We know the heinous acts committed by German Nazis during World War II, so does that justify me flying the Nazi flag from my front porch? Because it is a part of my ancestor’s history, does it make it okay for me to fly a flag that stood for the genocide of millions? Hopefully, you answered no. Just because my ancestors were a part of these acts, doesn’t mean I should be proud, or claim it as my heritage. Germans have a rich culture filled with so much more than what Nazis did. Similar to this, southernism has so much more to offer than a flag that symbolized a pro-slavery army.

With a better grasp on why the Confederate flag symbolizes racism, we can move on to find ways to minimize the flying of this flag. Similar to my earlier example of the Nazi flag, I don’t think we should rid the world of the Confederate flag. The history behind both of these flags is gruesome and terrible; however, it is still history. These flags belong in museums and in textbooks, where we can teach future generations about times when racism still ran rampant through our world.

At Southeast of Saline, we like to think that we would stand up to a bully. We like to think that we would help our classmates in a time of need. However, when the Confederate flag flies in our community, I believe our virtues fly out the window. Finally, I urge my peers to remember that both pro-slavery minded individuals and abolitionists fought over Kansas during the border wars, and in the end, Kansas entered the union as a free state. Our ancestors valued the idea of freedom among all, and we should remember this as our history, not the Confederate flag. The Confederate flag is symbolic of racism, and should not be accepted in any shape or form in our community.

Brookline, Hurd. “Taking Down the Confederate Flag.” Facing History and Ourselves,

Corbould Clare Corbould is a Friend of The Conversation. Associate Professor, Clare. “Why Is

the Confederate Flag so Offensive?” The Conversation, 20 Nov. 2020, theconversation.com/why-is-the-confederate-flag-so-offensive-143256.