SES students spend a night under the stars 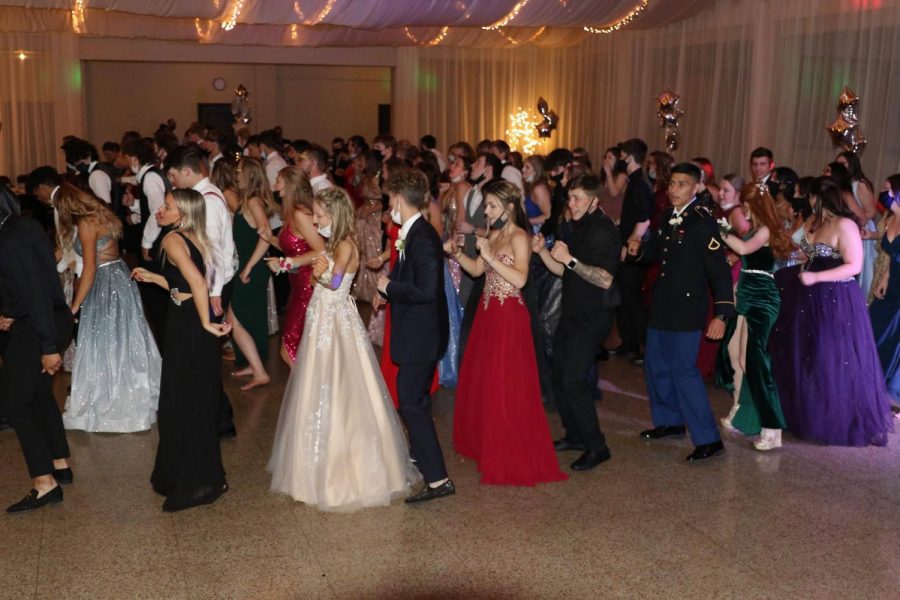 Students move along to a line-dance.

On April 24th, Southeast of Saline juniors and seniors spent a night under the stars at the Masonic Temple in Salina. Starting at 7:30, students began to arrive at the venue for their Promenade, where students walked up the Mosonic’s stairs with their dates and into the dance. The night began with the main dance from 8 to 11. As was expected, extra precautions were made such as wearing a mask, spacing out tables, etc. Students and their dates were able to take photobooth themed pictures and dance to the DJ.

Many students agreed the best part of Prom was being able to do a semi-normal activity after the last year. Senior Kennedy Gottschalk says, “Seeing everyone have a good time together and forget(ing) about all the stressful things that have been going on this year,” was her favorite part of Prom.

Once the main dance was over, everyone was given an hour break before “After Prom.” After Prom was held at “The District” in the Central Mall from 12 to 3. There was a table full of treats such as mini brownies, pizza, and a variety of drink options. Students had open access to all the games and activities typically held during normal hours. A class favorite was definitely the Go-Carts and the bummer cars. Junior Erica Francis says she liked, “watch(ing) people drift and ram into each other” during the Go-Carts. Attendees were able to pick a prize from a large table with anything from gift cards, blankets, suitcases, college merch, and much more. Student names were also put into a raffle and winners got big prizes like AirPods, TVs, Keurig’s and more. If students stayed the whole entirety of After Prom, seniors received $100 and juniors received $50. The After Prom Committee was able to keep everything under control and help pass out all the prizes. “I’m really grateful for everyone who put Prom and After Prom together so we could have a “normal” prom and have an awesome night!” says senior Makenna Bartholomew.